Solar and human powered side by side trike made out of wood and alluminium. 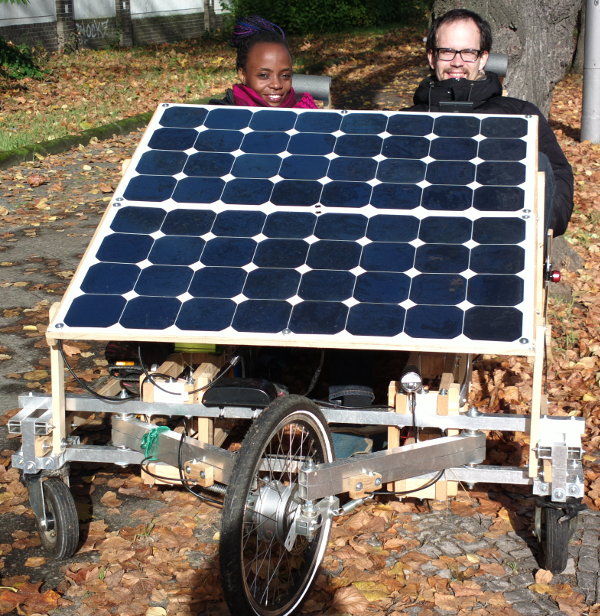 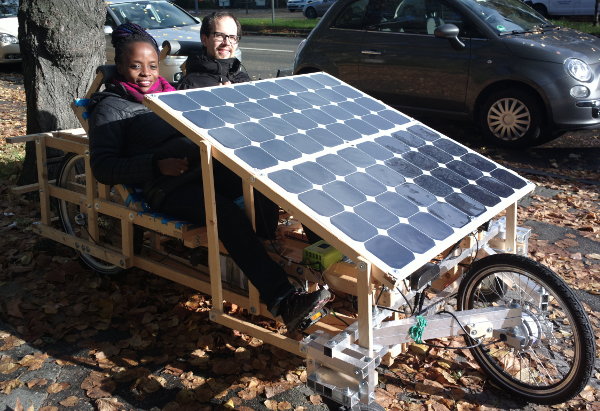 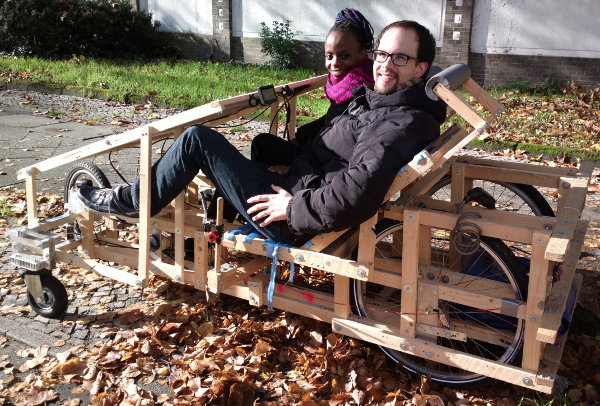 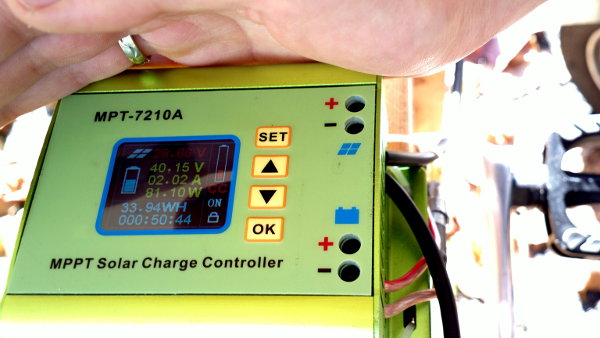 Solar charge controller: The battery is charged with approx. 80W in the direct autumn sun. 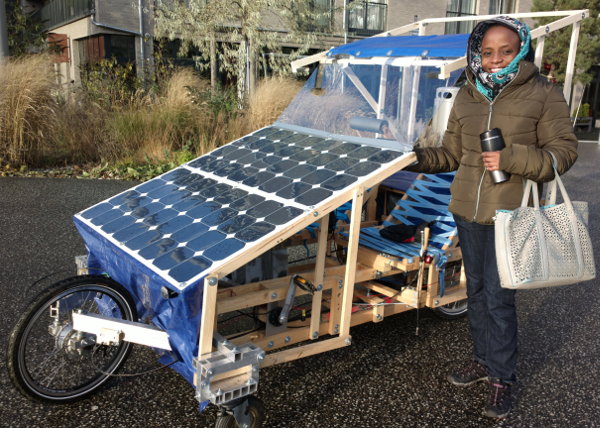 A windshield makes riding in the rain or cold weather much more pleasant. 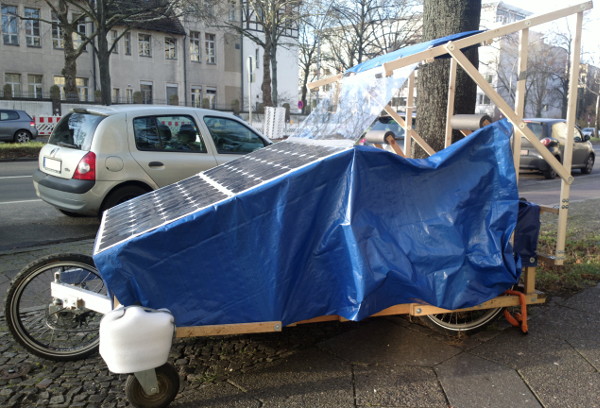 I like the idea of velomobiles which are enclosed recumbant trikes which provide weather protection and a comfortable riding experience. They are however rather expensive and heavy. Because of the weight an electric assist motor is advantageous. That's how the idea of a DIY solar powered trike was born.

The ZolarTrike is mainly build out of spruce wood with allumium tubes and plates where it is needed for structural strength. The front wheel is steered via Bowden cables while two caster wheels provide lateral support. The space between the rear wheels can be used as a cargo bay.

Two persons can ride side by side with the ZolarTrike. Both have their own independant drive train with a 3-speed hub. The driver (left side) has sole control over steering and braking and can also use the Trike alone.

The seats can be moved to the front and back after loosing four screws. This allows to accomodated persons with a body height between 1.50 m and 1.80 m. The head rest can also be adjusted.

Two 100 Wp semi-flexible solar modules charge a 36 V 15 Ah LiFePO4 battery and provide electricity for the 250 W front wheel hub motor. The motor starts up once the driver starts paddeling and assist the cyclists up to a velocity of 25 km/h. By having the motor switch off at higher speeds the ZolarTrike can be legally used as a bicycle in Germany.

The development of the ZolarTrike began with some 3d (Blender) drafts. 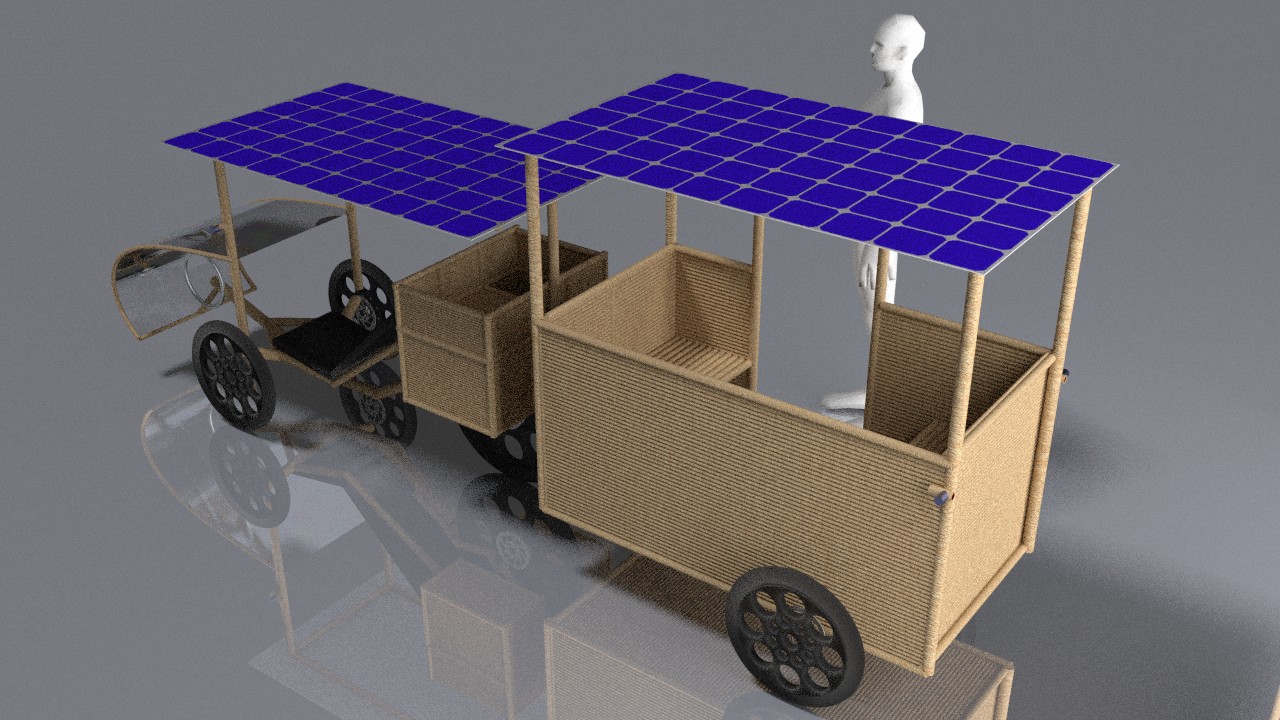 The design went through several iterations and was still far from final. The linked video above shows an earlier version with a wider trailer. The 2014 design is shown in the picture above with a longer but narrower trailer.

In order to get some experience in bicycle building I took part in an university project. Together with other students we built a bamboo bicycle frame.

The early trike design was base on this bamboo trike.

After considerable redesigns the Trike was built and is currently driven regularily in Berlin.

Next year a trailer for passenger and cargo transportation might follow. A third 100 Wp solar module might also be added to the roof of the Trike which would result in a maximum total solar power output of 300 W.