The Bike Boot provides a lot of space to keep your luggage dry while riding your bike. 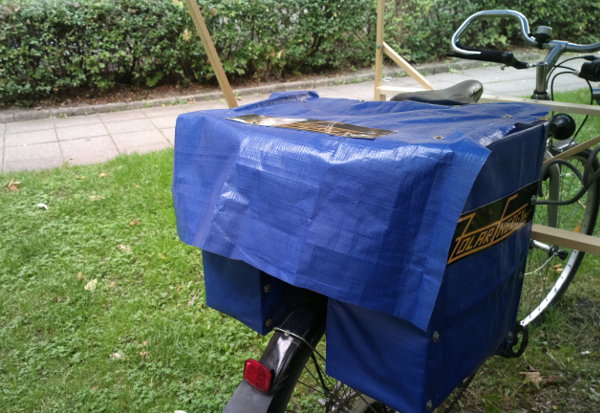 In order to be a good alternative to the car the bicycle needs a convenient means of transporting luggage.

Carrying a backpack might lead to a less relaxed ride and a sweaty back.

A bike basket is already a comfortable and practical solution to transport your luggage. But it does not provide any rain protection.

Bike boxes provide the possibility to keep the luggage dry and even locked. But the storage capacity is rather limited. Its just enough to fit in your helmet.

Bike trailers only really come into play for very many peaces of luggage or rather bulky ones.

Bike panniers provide rain protection and can easily be detached from the bike and be carried. But often fear of theft prevents the permanent placement of the panniers on the bike. Carrying them always around – even if not needed – is also not very practical.

A solution similar to the boot of a car was sought-after. Something which you can open quickly put bags inside or take them out and which you might even lock. 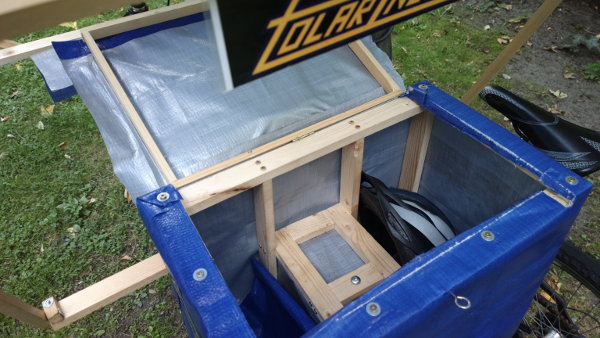 The Bike Boot protects the luggage from rain. If the boot is overfull and thus half open the fabric covering attached to the lid still provides rain protection. 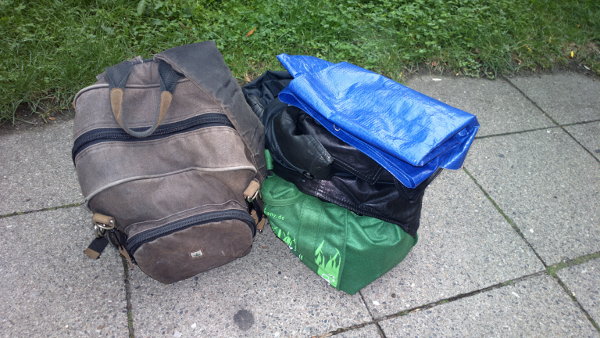 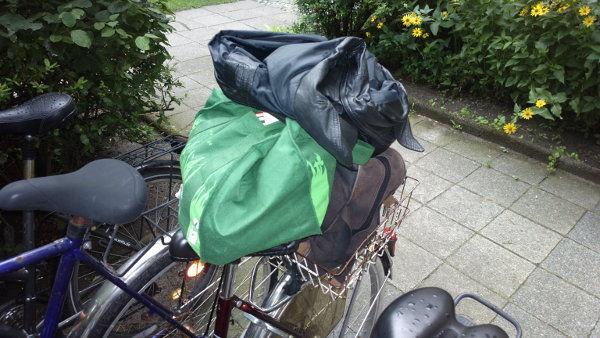 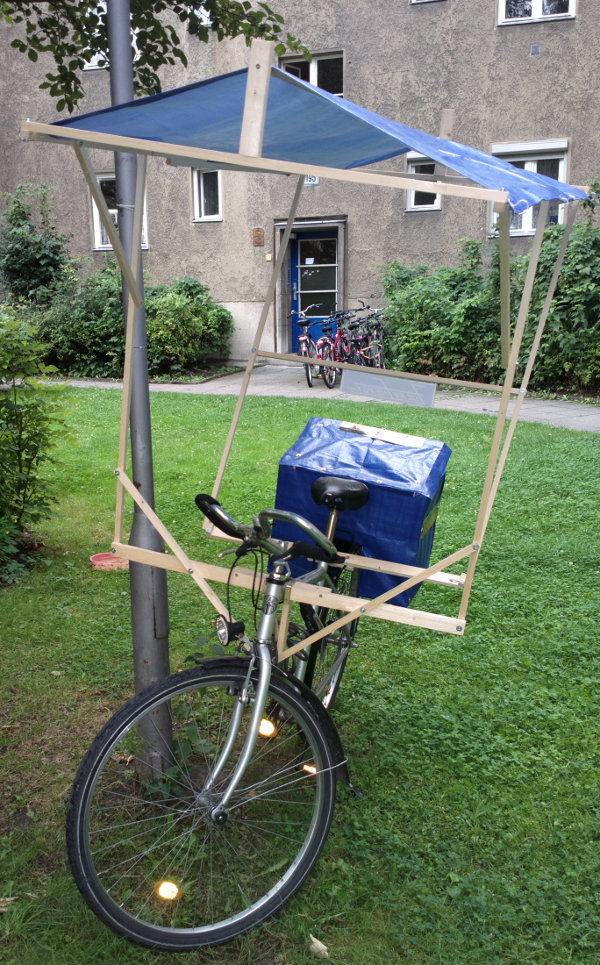 The current version has a storage capacity of 40l and weighs 2kg.

A larger version capable of carrying 17“ (43cm) notebooks is in the works. It will weigh approx. 3kg and have an approx. storage capacity of 60l.

Put full bags left and right and your backpack on top. Close the lid and you are good to go. When shopping you can also lock the shopping bags with a padlock, for instance to continue shopping somewhere else.

You should not lock valuables, though. While it probably will not happen in a public place at daytime, the boot could be slit open with a knife rather quickly.

The Bike Boot is constructed with stable laths connected with two clamps to the luggage rack. The low center of mass contributes to a stable handling of the bike.

The bigger version of the boot might be used as child seat, too. Cushions would be added and belts be attached to the lid that would act as backrest.

However, elaborate safety tests (TÜV) would have to be conducted first.

Similar to the bike roof, the Bike Boot is not constructed from expensive custom made parts but of standard components available at normal hardware stores (mainly laths and fabric covering) . Thus everybody can build his own boot himself and get replacement parts locally and cheap (sawing, drilling and screwing needed). Assembly kits will probably be available by next year, too (only screwing needed). 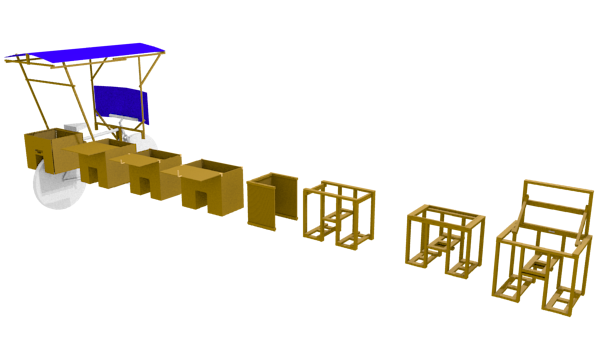 Stages of development of the Bike Boot.

The development of the Bike Boot began approximately at the same time as the Zolar Trike. Initially the boot was supposed to be built from thin bamboo tubes. But because of availability, price and complicated construction method this idea is currently not pursued any further.

The next idea was to built the boot out of plywood. But some investigation revealed that even the plywood with “weatherproof” glue was not suitable for outdoor application. Only chemically surface treated much more expensive plywood would be a durable solution.

Finally, the decision fell on to laths and fabric covering as building materials, similar to the bike roof construction.

Early August the first Bike Boot was constructed and is in use practically daily since then.

The bigger version of the bike boot is finished. The integrated child seat was already successfully tested with a puppet. 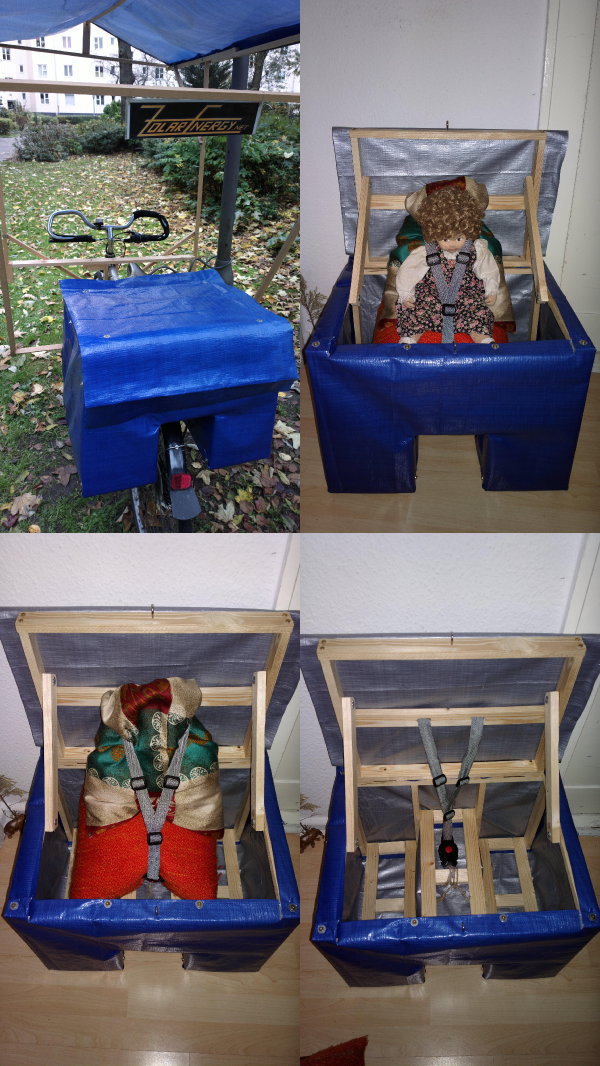 2015 the building instructions shall be made publicly available and assembly kits could be made available.

The child seat version will currently only be built for demonstration purposes.