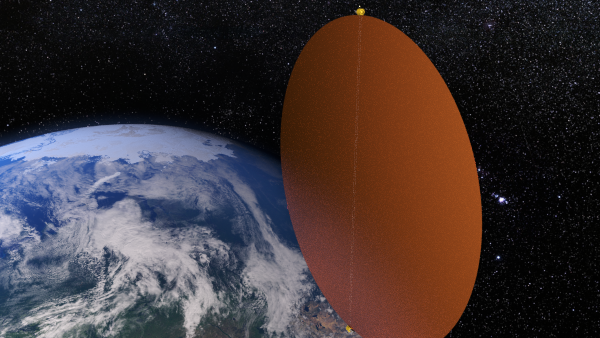 Creating a sustainable and fair economy and thus enabling current and future generations to live a good and joyful life here on Earth is of greatest importance and the main focus of this website. Most of our available means should be aimed at this goal.

But it is also in the nature of us humans to be curious, to want to know more and explore new horizons. Life can be seen as one big journey of learning, exploration and discovery. Without this journey, life would seem dull for many. To extend our gaze beyond Earth into outer space and other planets comes quite naturally.

Of course, space exploration can also directly benefits us. Satellites provide the means for communication, navigation (GPS) and weather observations and predictions. Additionally, facing the great technical challenges of space exploration can lead to solutions and technological advances which can directly benefit us here on Earth. A good example are solar cells. In the early years their development was primary driven by their suitability as a power source for space missions. Today they provide cheap and clean electricity for millions of people.

Launch costs to Low Earth Orbit (LEO) have come down quite a bit in recent years but are still pretty high with approx. 4000 US$/kg payload.Launch costs to geostationary orbit (GEO) or to other planets are many times higher. Reusable rockets and single-stage-to-orbit spaceplanes are predicted to reduce launch costs by a factor of 10 (~400 US$/kg) if and when introduced.

Launch mass will however remain a critical cost factor. 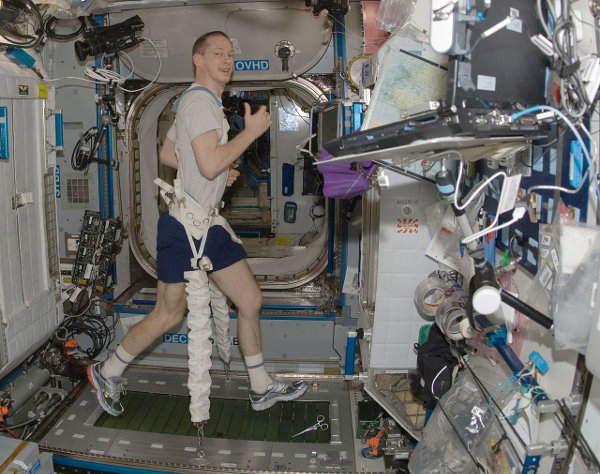 Intensive exercise can reduce but not eleminate health effects of weightlessnes: Aboard the International Space Station, astronaut Frank De Winne is attached to the T2 treadmill with bungee cords

Prolonged weightlessness as experienced in space can have negative health effects including bone and muscle loss. This could be avoided by artificial gravity most easily realized by having the spacecraft rotate like a centrifuge.

Prolonged exposure to reduced gravity as would be experienced on permanent human settlements on the Moon (0.17g) and Mars (0.38g) might result in similar health problems. Here it might be enough to use centrifuges during sleep and exercises. For inhabitants of a possible future cloud colony on Venus (0.9g) this would most probably not be necessary.

Astronauts in outer space are exposed to harmful radiation (cosmic rays) which can lead to higher risc of cancer and in case of solar proton events even to acute radiation poisoning and death. Sufficient radiation shielding is therefore necessary.

Reducing radiation levels from up to 900 mSv/a in space to the average 2.5 mSv/a experienced on Earth would require 1.5 thick radiation shields – assuming water as shield with its radiation halfing thickness of 18cm[2]. This translates to 1.5 metric tones per square meter outer wall area of the crew module – too much to be economic with current and near future launch costs.

Maned Missions to Mars utilizing chemical rockets and medium shielding would expose the astronauts with up to 1 Sv radiation just under the advised career limits for astronauts. 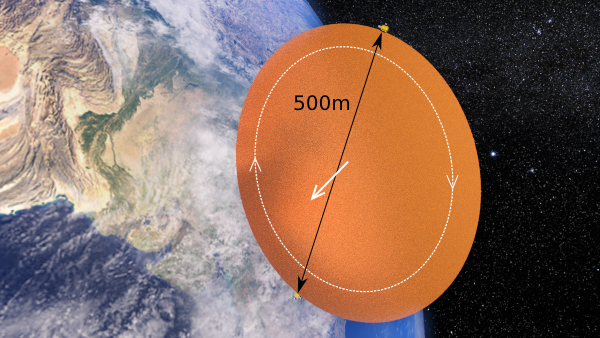 Spacecraft with dimensions as well as rotation and movement direction

The spacecraft consists of two identical double-modules which are connected with 500m long cables. One double-module consists of one heavily shielded module for the crew and a module with minimum shielding for machines and storage. The modules will be large enough to accommodate a crew of 2-3 astronauts each (total of 4-6 astronauts). They are rotating around their common center of mass with 1.9 rpm generating 1g of artificial gravity. The large diameter and slow rotation should guarantee that the Coriolis effect remains negligible.

Health riscs of weightlessness are avoided and life becomes more comfortable being able to normally walk, eat, take a shower, use the toilet, sleep, etc.

One or more landing capsules could be used as shuttles between the two habitat modules – traveling along the connecting cables. They could also be stopped in the middle of the spacecraft to enable zero-g experiments and recreational activities.

To prevent psychological effects of prolonged spacial confinement VR head-mounted displays and omnidirectional treadmills could be used for virtual excursions.

Food is grown in hydroponics systems using human waste as fertilizer. The fresh produce can reduce the necessary amount of food storage and keep the crew healthy (and happy). Some (dry) food would probably still be carried from Earth: rice, legumes, flour, sugar, pasta, etc. 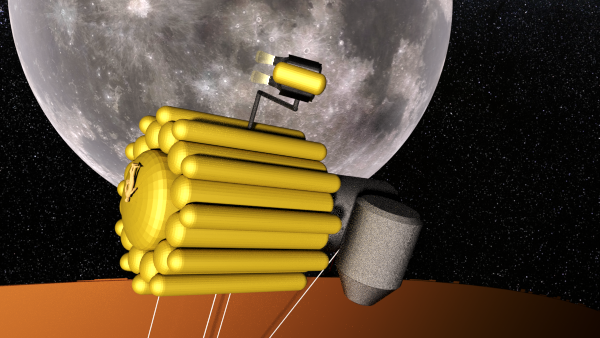 The thruster is attached to a 4-rotation-axes construction allowing for propulsion in any direction independen of spacecraft rotation. Small propellant tank (yellow) attached to the thruster will be refilled every few days from the larger tanks shielding the habitat module. Landing capsule is attached to machine and storage module. It also funcions as a shuttel to the zero-g area in the middle of the spacecraft and the other habitat module on the far side. Human (1.8m) for scale.

The spacecraft is propelled by a magnetoplasmadynamic thruster like the VASIMR. Advantages of these types of thrusters compared to more common ion thrusters are higher possible thrust densities, potentially longer lifetime and the capability to theoretically use any propellant.

Each of the two double-modules is equipped with one thruster. They are mounted on rotating axes to enable propulsion in the desired direction while the spaceship is rotating to generate artificial gravity.

Electric propulsion for spacecrafts has the advantage of very low propellant consumption compared to chemical rockets. This comes however at the costs of a very high electric power demand.

For the inner solar system solar power is best suited. As the power source has to be accelerated, too, its power density is its most important characteristic (acceleration is equal to thrust divided by total mass). Currently used solar modules for space applications reach up to 100 W/kg while single solar cells have achieved up to 4 kW/kg in the laboratory with a power density of 120 W/m² [3]. (Nuclear) radioisotope thermoelectric generators only achieve values below 10 W/kg.

The spacecraft uses the ultrathin (~10 μm) solar cells mentioned above. The modules are deployed by the rotation of the spaceship and form a disc with 500 m diameter – giving the spacecraft its name. They have a mass of approx. 10 t (assuming additional weight compared to the laboratory cells due to wiring and additional protection layers) and will produce a maximum electric power of 24 MW in Earth orbit. This will reduce to 10 MW (43%) when orbiting Mars and increase to 46 MW (191%) when orbiting Venus.

If more power is needed for larger payloads or shorter transit times, a larger diameter of the disc can be chosen.

While orbiting planets the spacecraft can harvest gas from the upper atmosphere to be used as propellant. The gas particles collide with the disc of solar modules. Due to the rotation of the disc the gas will be transported to the outer edge of disc. The disc thus functions as a centrifuge. At the outer edge the gas is captured in tubes. It is then pumped into storage tanks positioned around the two double-modules of the spacecraft. It can now be used as propellant for the electric thrusters.

The spacecraft will start its mission in LEO at an altitude of about 350 km. At this altitude air has a density of approx. 3.5·10⁻¹¹ kg/m³ with atomic oxygen being its main constituent[4]. With an orbital speed of 27 720 km/h and an average collecting area of the disc of 98 175 m² the spacecraft will be able to harvest 2.3 t gas per day. The spacecraft will have to compensate for a braking force in the atmosphere of 204N. We assume a thrust to power ratio of 25 N/MW of the thrusters (based on VASIMR 200 kW thruster) and an average available solar power of 14 MW – reduced from the maximum power of 24 MW due to the shadow of the Earth. The thrusters will be capable of generating a thrust of 360 N – enough to compensate the braking force.

Power demand to compress the collected gas to 500 bar will be 0.5 MW assuming 50% efficiency.

It will take the spacecraft about 4 months to collect 200 t propellant (already taking into account a propellant consumption of 0.7 t per day and assuming a specific impulse of 2500s).

Propellant and Water as Radiation Shielding 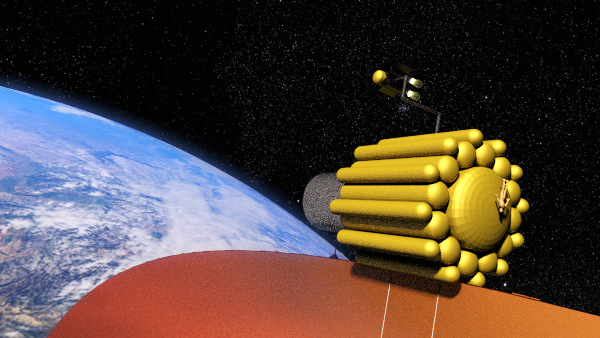 Habitat module with extensive radiation shielding (yellow tanks) in the front. Machine and storage module with minimum shielding in the back. Human (1.8m) for scale.

The propellant will be positioned around the habitat modules functioning as radiation shielding. But as it is used up during the mission additional shielding is necessary. Water could be used. Oxygen can be collected in orbit and only the hydrogen will have to be launched from Earth. This can decrease the launch mass and costs for water shielding by nearly 90%.

If oxygen and hydrogen are also stored in separate tanks they can be combined with a fuel cell. Thus they can function as radiation shielding and energy storage at the same time.

Especially the feasibility of the in-orbit gas collection and the rotating thruster construction have to be studied.

Once (and if) the feasibility is confirmed a small scale demonstration unit can be built and sent into orbit for experimental testing.

An unmanned spacecraft can be used to collect propellant in orbit and refuel satellites using electric propulsion. It could also be used as a space tug, lifting payloads from LEO to higher orbits. Additionally it might be used to clean up the Earth orbit. It could collect space debris for controlled atmospheric reentry or in-orbit recycling. 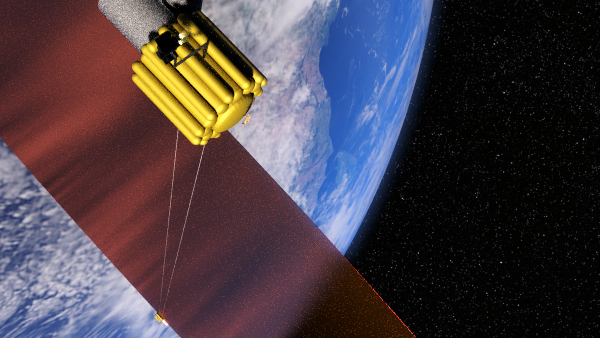 Finally the full scale spacecraft can be built and used for manned missions to the Moon, Mars and Venus.

Manned missions to Venus and Mars are possible with current or near future chemical rocket technology. Economic feasibility mainly depends on a reduction of launch costs. As already mentioned above, this could be realized by reusable rockets or single-stage-to-orbit spaceplanes. 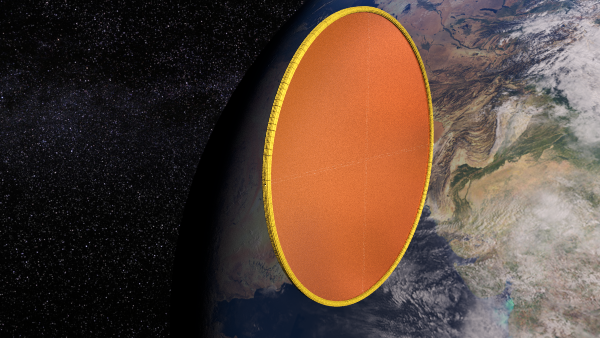 The spacecraft design could also be adapted to be used for a space station instead of an interplanetary spaceship. The thrusters will only have to compensate for atmospheric drag which could be achieved more economical with propellant collected in-orbit compared to chemical thrusters with propellant carried from Earth as is done currently for the ISS.

For interplanetary missions the thrusters need to accelerate the full mass of the spacecraft. Therefore spacecraft mass has to be kept at minimum to ensure fast trips.

This is however not the case for a space station which could have a much larger mass mainly limited by launch costs. This could enable a crew of 100 or more and having two fully closed rings of habitat modules. One ring could be used as corridor/street and for hydroponics while the other ring would provide space for living, work, storage and more hydroponics. With more space available for hydroponics, its independent (solar) power supply, propellant collection capability, artificial gravity and maximum radiation protection the station could become a permanent quasi self-sufficient human settlement in space.