The ZolarBike is a bike roof which protects against rain and sun during the bike ride and can recharge your e-bike battery on the go using solar power. 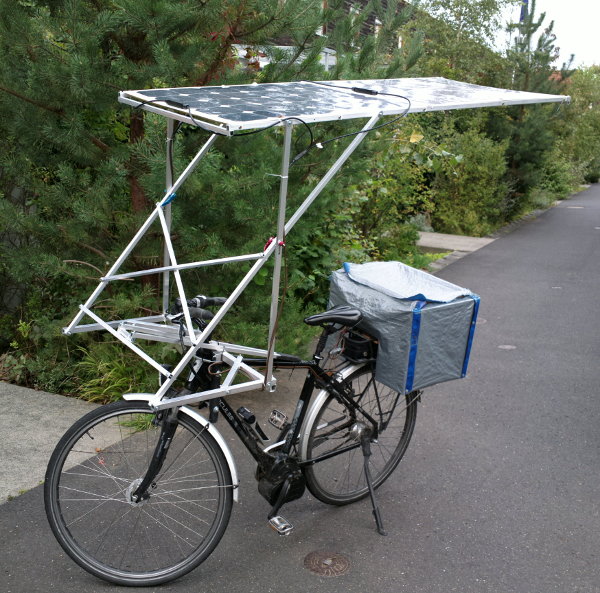 Prototype 12 with 200Wp of solar modules. 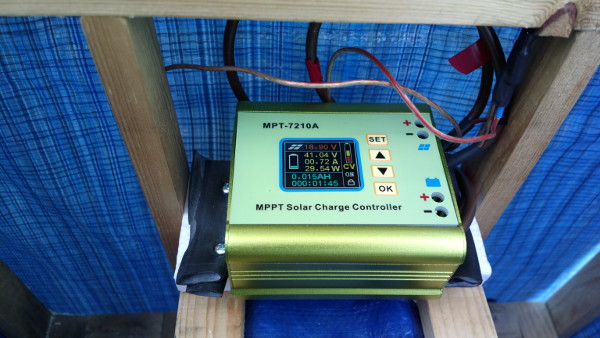 Battery charge controller of the ZolarBike 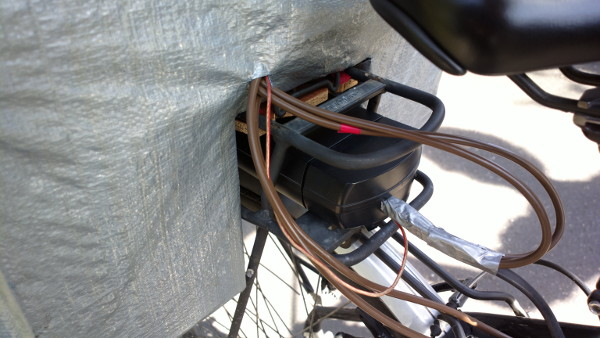 The concept of the ZolarBike is quite simple. A wooden or alluminium construction is attached to the bike frame via a clamp-connection. On top a fabric covering or leight-weight, semi-flexible solar modules are attached. This provides rain and sun protection.

During rain an additional fabric covering can be attached to the front to protect from head-on rain.

The solar version of the ZolarBike has two 100 Wp solar modules mounted on the roof. These enable the recharging of the e-bike battery on the go. A charge controller boosts up the 18 V of the solar modules to the 41 V charging voltage. It also limits the charging current to 4 A (depending on the allowed charging current of the battery) and stops charging once the battery is fully charged in order to protect the battery.
How many kilometers can be driven purely using solar power depends on the power requirements (amount of electric assist, hilly vs flat terrain, etc.) and the amount of sun available. In northern regions (e.g. central Europe) the lower avarage position of the sun means a reduction of the solar power available due to the non-optimal angle of the solar modules and shadows from buildings and trees. Still, it should be enough to cover the typical commute distances. Real world data from the first ZolarBike with solar modules shown above will enable a more precise solar range estimation.

For equatorial regions the higher position of the sun means that the mounting angle of the solar modules is now optimal and shadows from buildings and trees will also be reduced. This should result in a significant boost of the solar range of the ZolarBike.

The ZolarBike provides an effective rain protection similar to that of an umbrella. During stronger winds a jacket might still be helpful. And against splash water over-shoes are still useful.

Especially during midday you are protected against direct sunlight. This makes a more relaxed bike ride possible and protects you (your eyes) from harmful UV radiation.

Visibility during rain is not reduced by a front shield. Other road users can more easily and quickly spot the bike.

Additional wind resistance is minimal due to a small front surface (subjectively not noticeable up to 20 km/h). Sensitivity to side winds is much lower than could be expected from the appearance of the roof. During very stormy weather it is however not recommended to ride the bike with the roof (but also not without it).

No wet clothes any more – on your body or in your bag. Rain protection even when pushing, locking or unlocking your bike. Children in child seats will also remain dry.

Instead of relying on expensive custom made parts, the roof is made of standard components available at normal hardware stores. Everybody can build their own roof themselves and get replacement parts locally and cheap (sawing, drilling and screwing needed).

Because of the remarkable appearance and size of the roof, thieves might be discouraged. Casual thieves have to be afraid that the bike will be recognized. Professional thieves who use small transporters to steal many bikes at once will need to first dismount the roof or will only be able to transport much fewer bikes. For the solar version the solar modules might still be attractive for thieves. Here a suitable insurance might help.

For Whom Is It Not Suitable?

Are you always taking your bike inside because of fear of theft instead of leaving it locked outside (very expensive bike, dangerous area)? Then the ZolarBike will likely not be suitable for you because of its size. Still, for people living on the ground floor or where a bike celler is available putting the ZolarBike inside during the night might be an option.

The same is true if you regularly take your bike with you into the train. While it is possible, it can lead to complications especially in full trains.

Because of its mounting principle the bike roof is compatible with most but not all adult bikes. Requirements are separate top and down bike frame tubes.

If the ZolarBike is not suitable for you, following commercial bicycle roofs (without solar) might be alternatives: Allride, Veltop, Dryve.

I got the idea of the bike roof while thinking about a solar electric assist trike. The solar panel is supposed to function as a roof and give the trike the advantage of a velomobile (rain protection) while simultaneously producing electricity for the propulsion. More information about this idea under Zolar Trike. 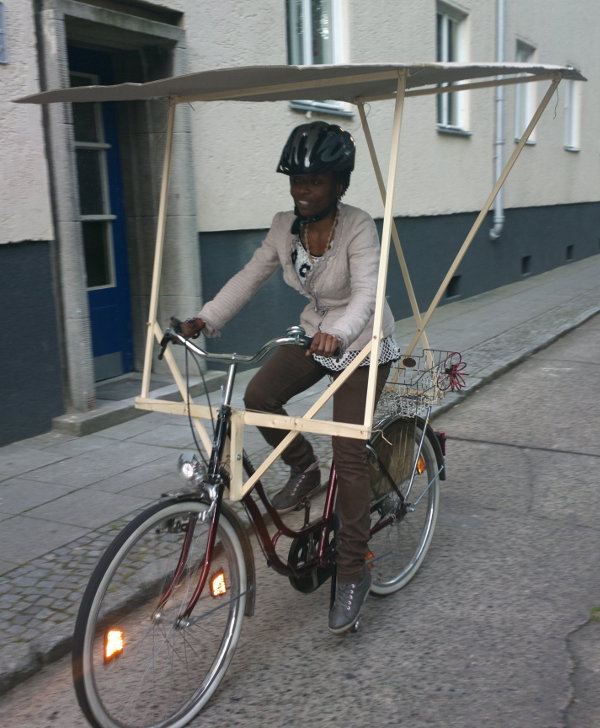 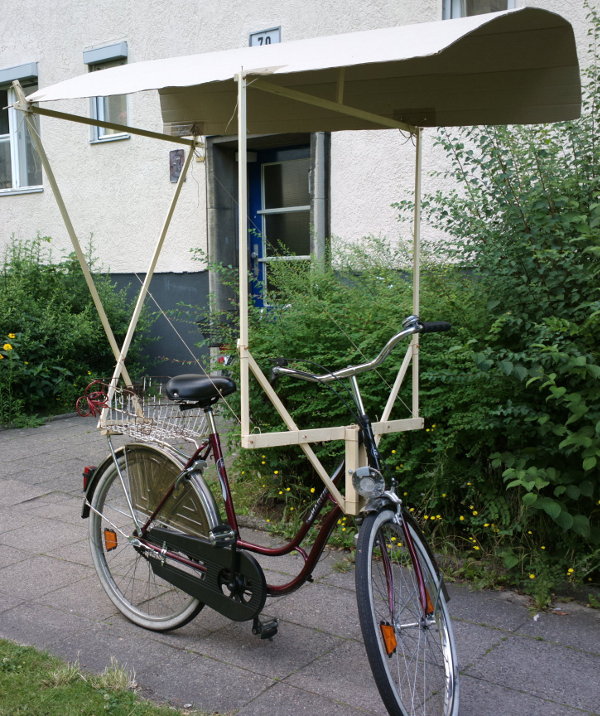 I asked myself if the same principle could be applied for normal bicycles. Early July 2014 I built prototype 1 out of wood and cardboard. The main purpose of this prototype was to test balancing and riding under windy conditions. Prior to riding it I was quite skeptical – as most people would be. But I was positively surprised by the quite stable handling performance. 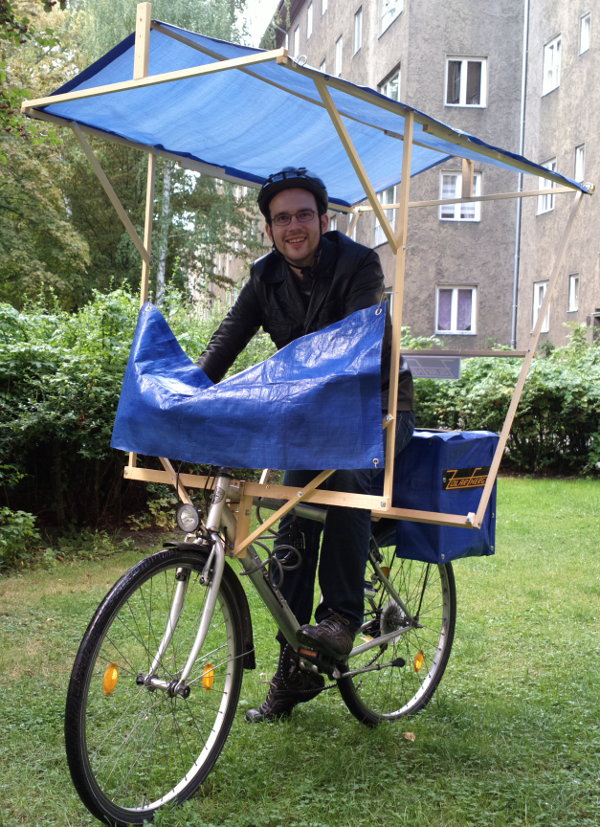 Early August I built prototype 2. The cardboard was replaced with water resistant fabric covering, more stable (screwed) joints are utilized and the whole construction is significantly more stable and allows for flexible mounting even if a basket or child seat is present. During the following months I regulary used the ZolarBike and built new versions improving on the stability, design and handling. 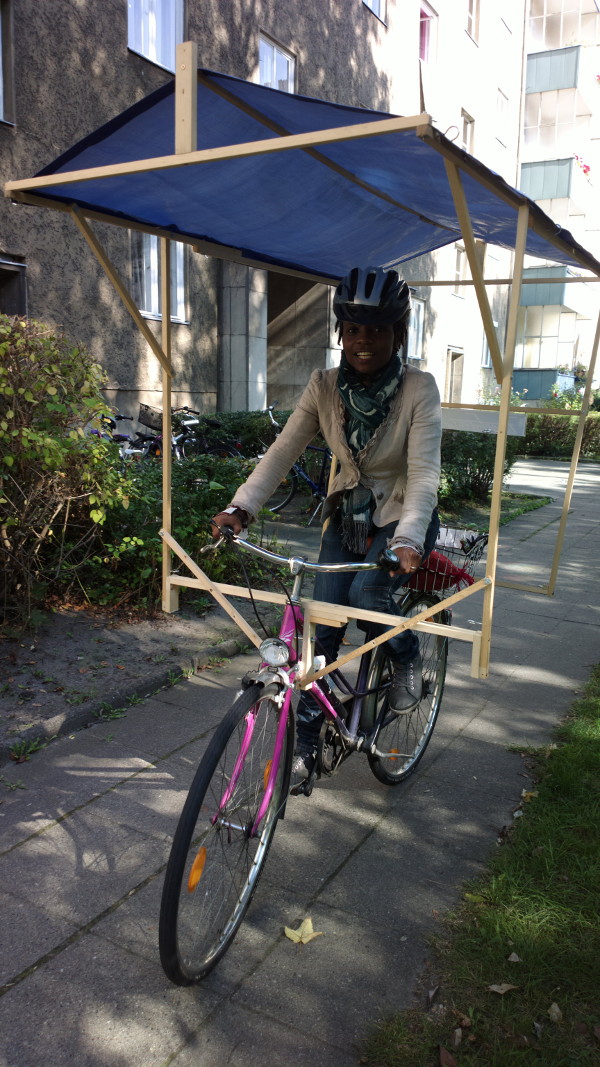 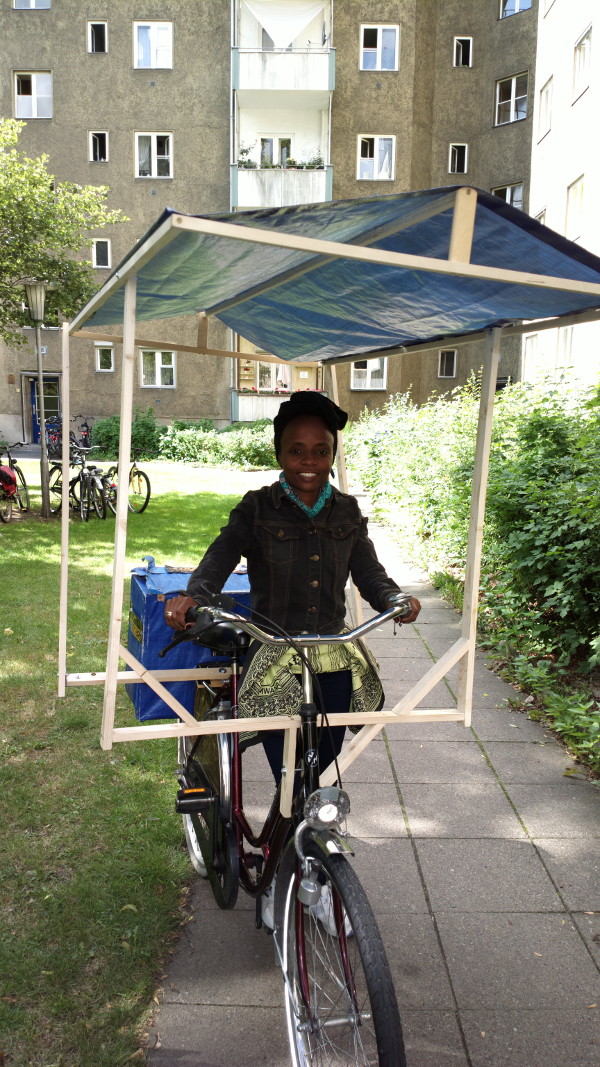 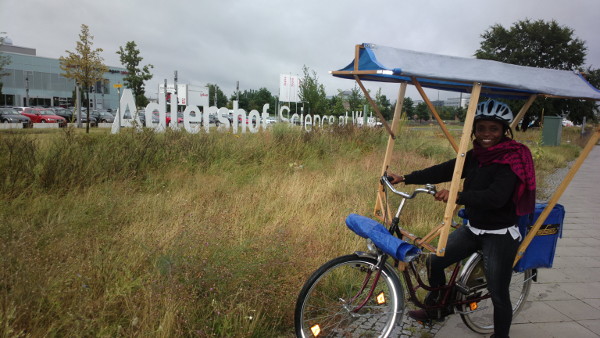 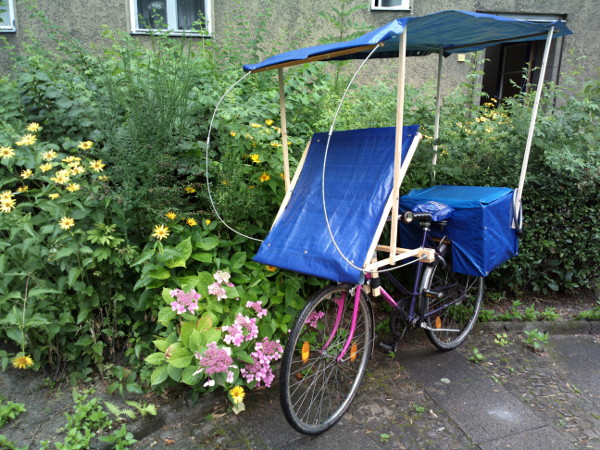 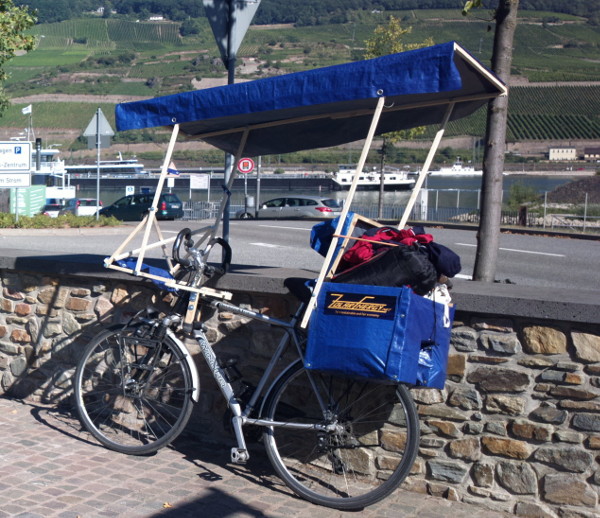 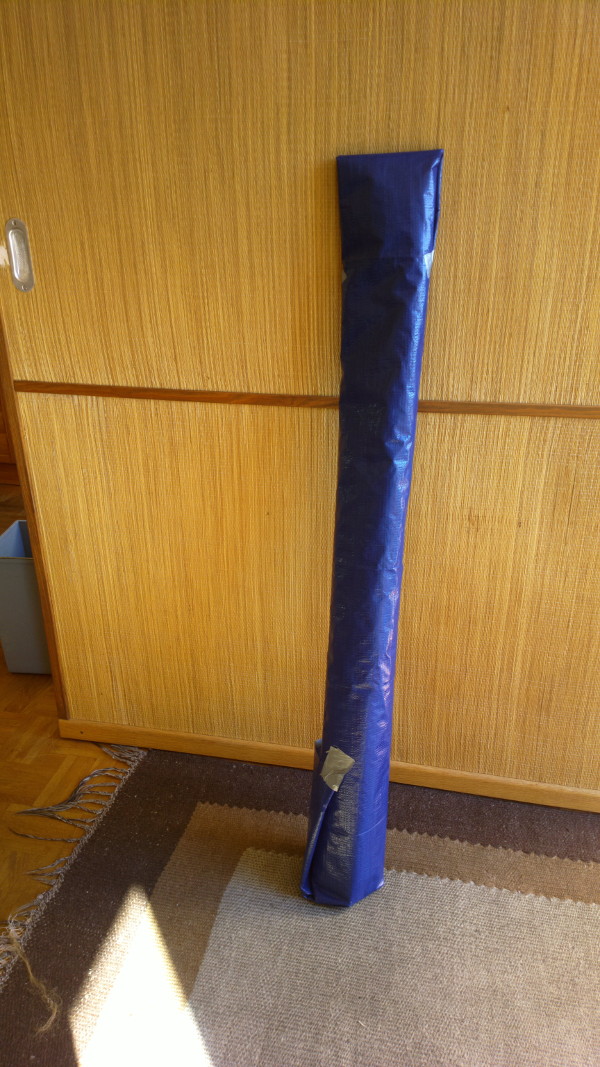 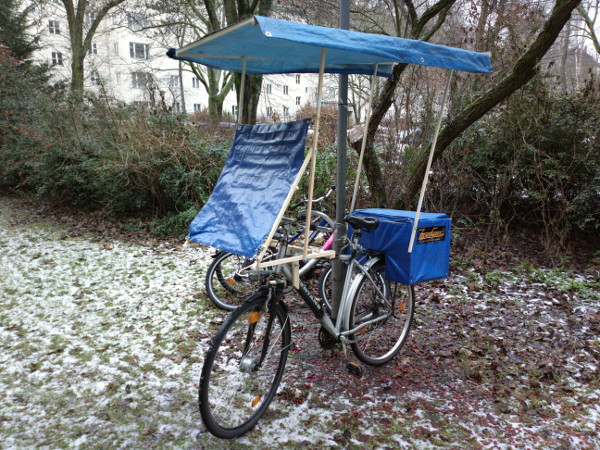 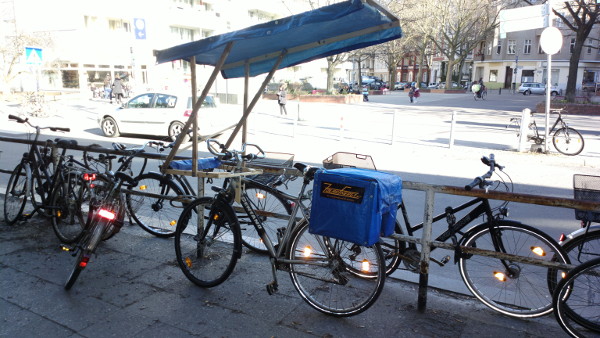 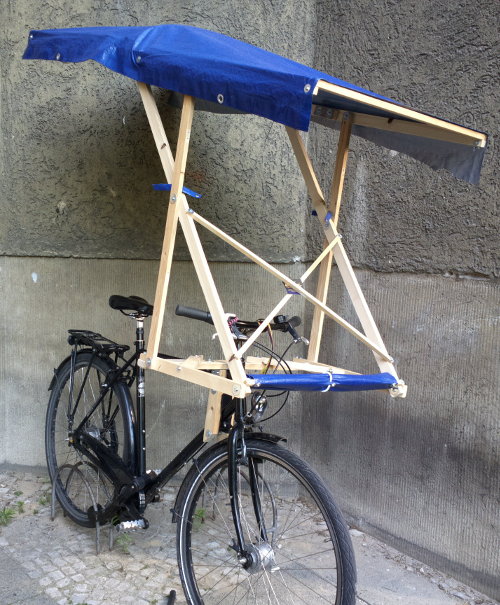 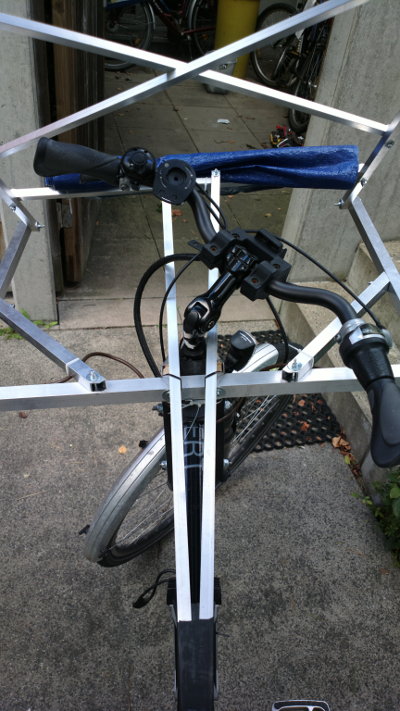 These additional alluminium tubes signficantly reduce swinging motion of the roof during accelaration and braking. 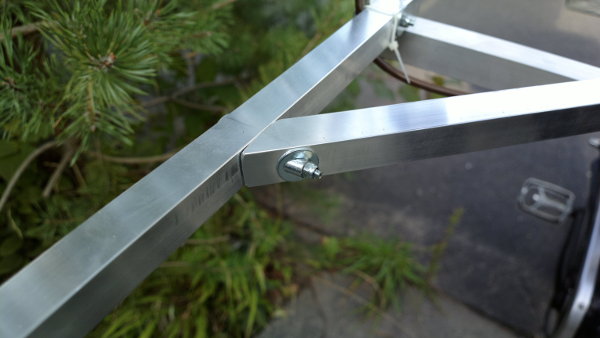 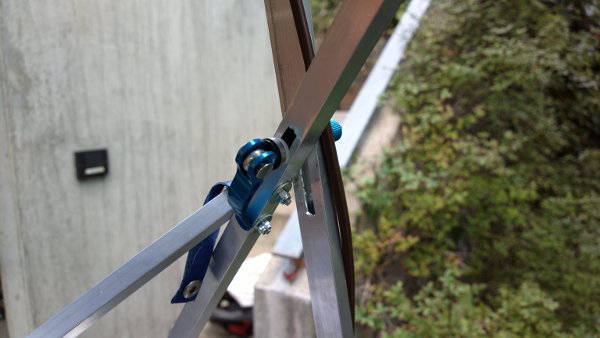 Quick clamp to adjust the angle of the roof.

This is the first alluminium version of the ZolarBike. The additional tubes as shown in the pictures above significantly reduce any swinging motion of the roof and lead to an improvent riding stability. Similar to protoype 9 and 11 no rear support poles connected to the rack are utilized. This enables the ZolarBike to be used for bicycle taxis like the BodaBodas in East Africa. Here the passengers sit on the bike racks and any supporting structure would be in the way.

The solar version (Prototpe 12) was tested for close to a year. Between March and October, there is sufficient sunlight here in Germany for a fully solar (and pedal) powered daily commute (total 12km/day). During the winter the batteries have, however, to be additionally charged regularily with grid electricity. Even on sunny days the solar modules received only a few minutes of direct sunlight due to shadows of buildings. For its intendend main market region of East Africa the sunlight should be sufficient for continous solar charging throughout the year. 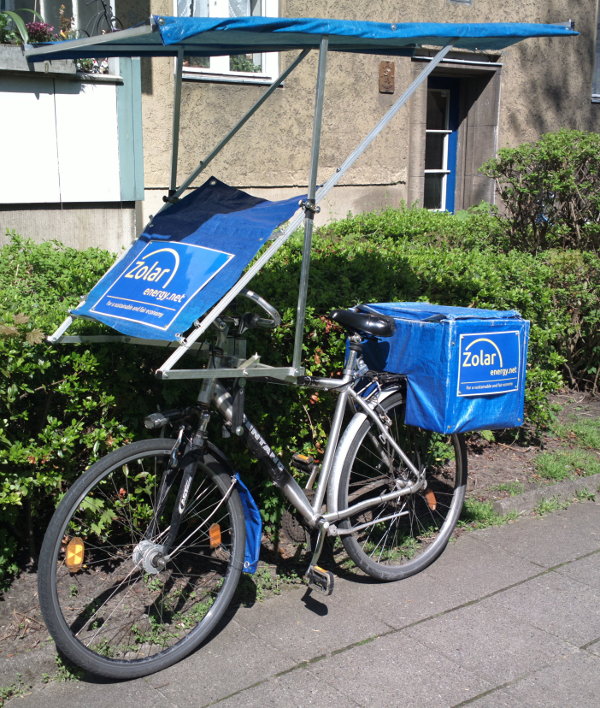 Prototype 13 is very similar to version 12. The roof supports are more evenly distruted to further reduce any swinging motion of the roof. (The rear of the roof swinging up and down). 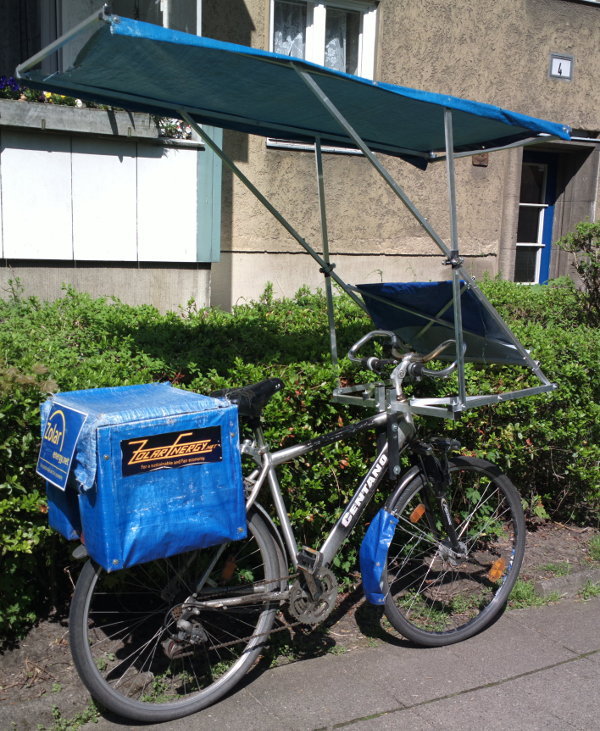 Additional alluminium tubes to reduce swinging motion as used in the solar version (12) are not neccessary without the 4kg of solar modules. 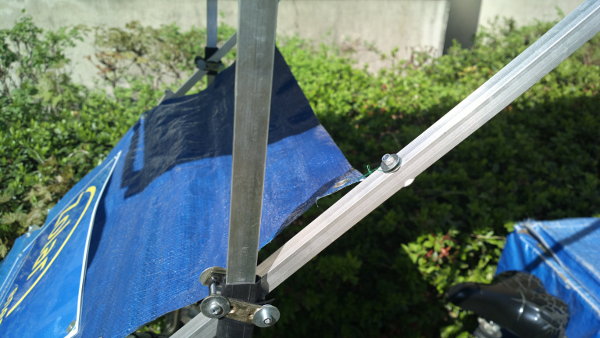 The connection between the roof support tubes is now done by crimping to avoid a structual weakness due to holes. The latter proofed problematic in the wooden version (Protoype 7). 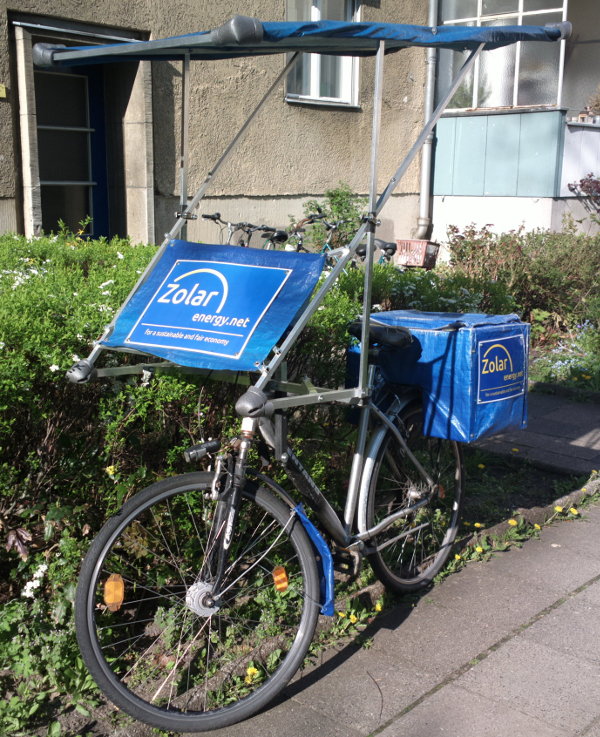 Foam protectors at the exposed corners reduce the threat of injuries in case of collisions with pedestrians or other cyclists. 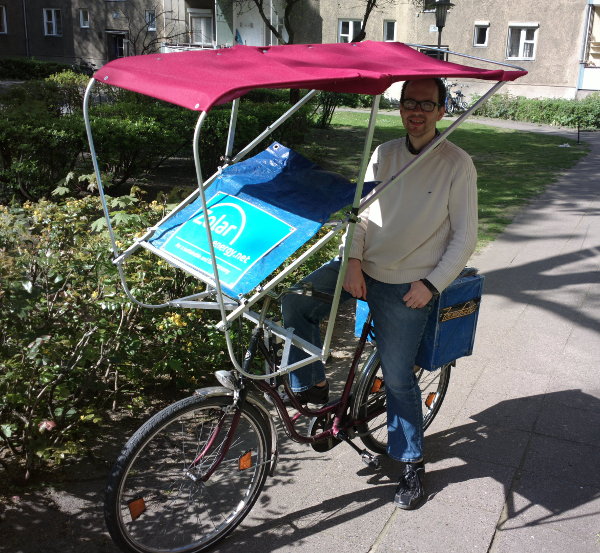 Prototype 14 features round corners eliminating the hazard of sharp corners of the previous prototypes. Aluminium tubes with 12 and 10 mm diameter were used and bend while filled with sand to prevent buckling.

My friend Matthias has a bicycle power meter which measures the pedal power during the ride via a special rear hub. We used it to measure the increased drag due to the bike roof (protoype 14).

We choose a flat 2.2 ḱm long round trip with two short stops (to simulate traffic). We made the trip a total of 7 times at different average velocities first without roof and than with roof. We did the trip for the first average velocity of 17 km/h twice without roof giving an average power needed of 54 W and 56 W respectively. This shows that our results were reproducible. 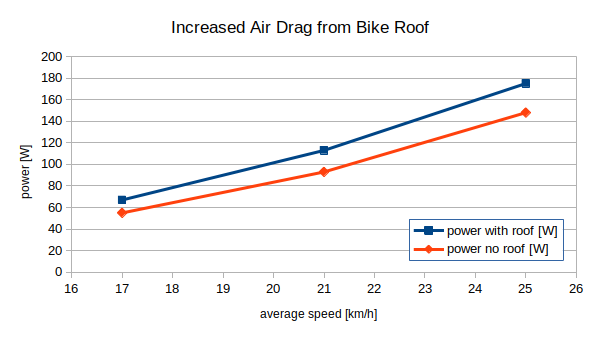 The roof increases air drag by 20%. For the same pedaling power you will be around 1.5 km/h slower with the roof. The solar version will provide a power assist of approx. 190 W (assuming 250 W electric power and 75% efficiency). At max speed of 25 km/h 14% (27 W) of the additional power will used up for the increased air drag leaving you with a net 86% of the motor power. For slower speeds the power loss due to increase air drag will be lower. 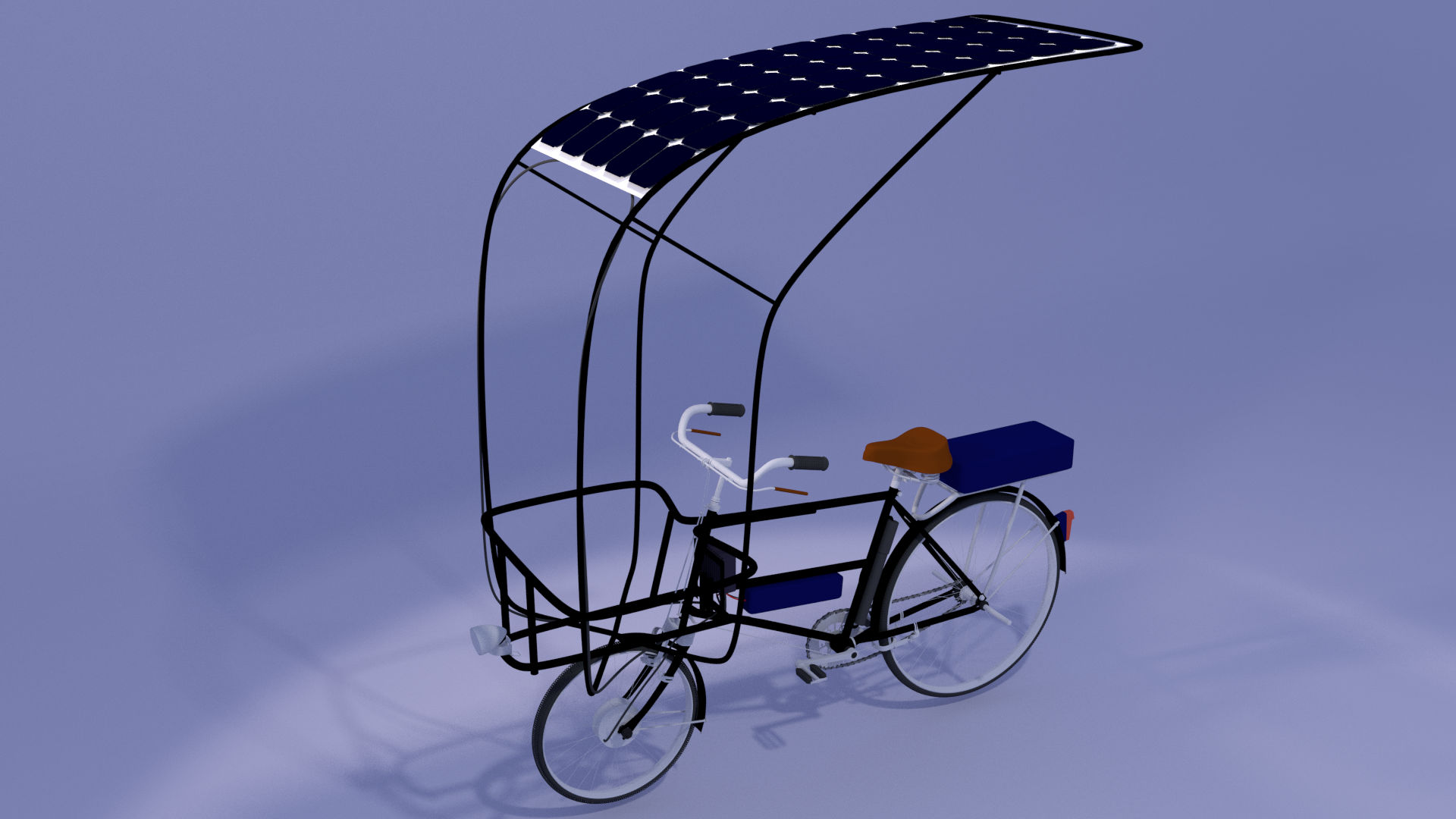 The ZolarBoda provides cargo an passenger transportation. 3D-Bicycle model by ericblender7 was used and modified.

The ZolarBoda can transport cargo in a large basket above it's 20" front wheel and passengers on its rear mounted seat. It is based on the low cost Low Gravity cargo bike (also called bakery bike) shown bellow. 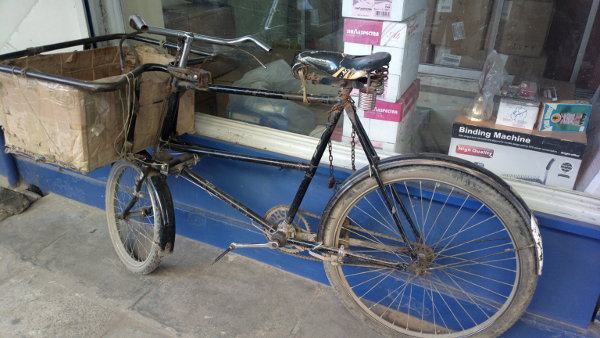