The following shall show why intellectual monopoly in form of copyrights and patents should be abolished in order to realize a better, more sustainable and social responsible economy. Relevant informations can be found on Wikipedia[1] and the therein quoted sources (especially[2]).

The Importance of Copying 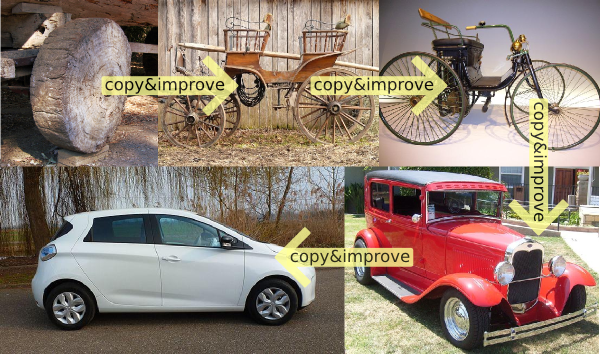 Copying is an essential part of our lives. It starts as infants when we copy the behavior of adults and children, thus learning to speak and walk. Later in school we copy more knowledge: how to read and write, do maths and how to obtain even more knowledge.

Copying is an integral part of science, too. If every Physicist needed to rediscover Newton's laws of motion all over again we would not have quantum mechanics or the theory of relativity today.

The same goes for technology and the economy. If the the first car engineers could not just refit existing horse carriages as they did but needed to quite literally reinvent the wheel we would have no cars today.

A society should therefore aim at making copying as easy as possible and remove factors that impede it.

Patents are monopolies given out by governments to persons who first apply for a patent for a specific invention. The inventors can then forbid other persons to use the inventions (or demand a usage fee). This is even true if those persons might have created the same inventions independently. Simultaneous discoveries have occurred quite frequently in history[3].

Generally most economists today agree that monopolies have a total negative effect on the economy and the society. They were therefore widely abolished with the notable exception of patents and copyrights.

Obvious negative effects of patents include the unnecessary high product prices because patents prevent the forming of enough competition. Patents in fact impede innovation. An invention is often a gradual improvement on an existing idea. If this existing idea is already patented the inventor cannot freely introduce his improvement to the market. Even for more or less completely new inventions there is the risk that it is already covered by an existing (broad) patent. The patent system therefore introduces high costs for patent searches and high risks when introducing new products to the market.

The widespread opinion that patents promote innovation can not be confirmed by historical data. There is no correlation between the development of the patent system and innovation as measured by the Total Factor Productivity: how much output (of food, for example) can be produced from given inputs (labor and land, for example)[4].

Start-ups often lack the funding for an intensive patent search or an own patent application. Established big companies on the other hand often have a large patent portfolio which they can use to block competitors.

Copyrights are monopolies given out by governments to creators of original work. The copyright holder can forbid copying and demand license fees for usage of the work[5].

The official justification for the copyright system is to enable creators to be able to receive compensation for their intellectual effort.

In reality copyrights are often valid the whole live of the creator plus 50 years. This results in unnecessary huge profits for copyright holders who most often are not even the creators. These profits correspond to unnecessary high costs for consumers.

Inventions occur because they can give the inventor an economic advantage over the competition. Whole branches can work without patents and copyrights as the open source market shows. Often the easier an invention is to copy the easier and cheaper it was also to develop. In fact quite a view discoveries and inventions occur unintentionally by “accident”. The more difficult and costly an invention was to develop the longer it often takes to copy it with corresponding higher costs. For instance in the IT sector a technological lead of only a view months can be a decisive economic advantage.

In cases where the free market indeed fails to lead to necessary innovations, instruments can be implemented with less negative effect compared to the current monopoly system. For example price money can be awarded by governments or NGOs for the development of a needed drug against a dangerous disease.

Artists can get compensation for their work by ticket sales to live performances. Artists, book authors and filmmakers can use crowdfunding[6]. Filmmakers for example need to have the complete funding of their project secured way before the first movie tickets or DVDs (Blu Rays) are sold. Instead of relying on the big film studios they can get the production capital from the consumers and fans directly per crowdfunding.

Additionally, continuous technological advancement and Freiwirtschaft&Basic Income[7] will result in lower barriers for innovations and (creative) work to take place. The livelihood would already be guaranteed and the costs for (intellectual) work would be much lower – not least because of the absence of intellectual monopolies.

In the following I want to publicize some of my own ideas or “inventions”. I developed them in my free time partly with some help of friends and family. As with practically all inventions they were influenced more or less by existing products and ideas.

They are published here in order for them to enter the public domain. If no patent covering them already exist (I did not do an intensive, time consuming, costly patent check) they will not be patentable anymore.

Everybody (including me[8]) is free to use and further develop the ideas.

Some of the ideas are more detailed and nearer to a practical final product. Others are more of a theoretical nature and shall stimulate more thought and development.