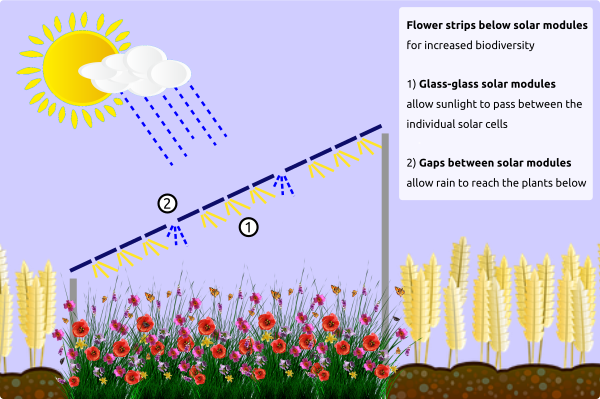 Schematics of a Agrophotovoltaik power plant with alley cropping. 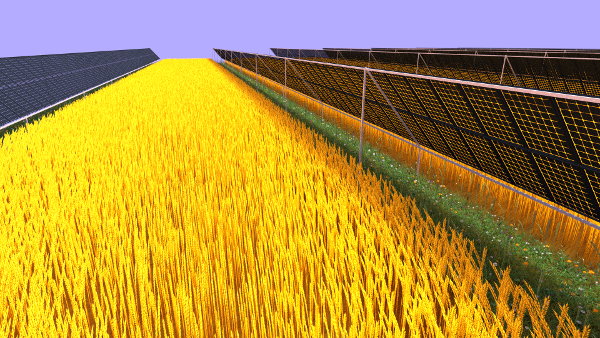 Between the solarmodule rows crops can be cultivated. 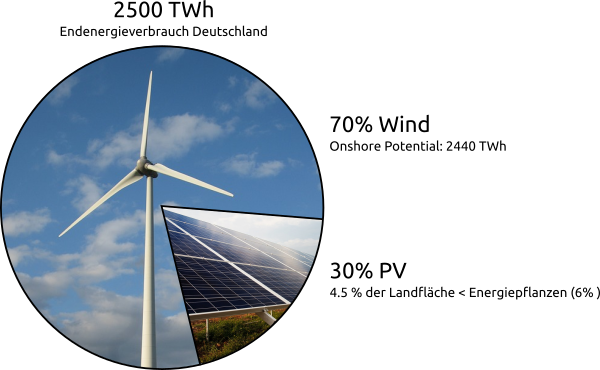 A sustainable and cost effective energy supply in Germany from 100% renewable energie will proabably mainly consist of wind and solar energy. If 70% of the yearly 2500 TWh end energy demand (electricity, transport, heat) will be met with wind turbines (onshore potential in Germany: 2400 TWh) we'll need 750 GWp PV for the remaining 30%.

Only using large scale solar parks approx 4.5% of the land area of Germany would be needed (at 0.5 MWp/ha). This is less than the area currently used for energy crops (6%). Compared to the latter photovoltaics has a more than 20 times higher energy yield per area and increases biodiversity as the land is not constantly cultivated using pesticed and soil tilling.

The actual land demand will be significantly lower. Firstly, the electrification of the heat and transport sector as well as better building insulation and other efficiency measures will result in an electricity demand lower than 2500 TWh. Secondly, part of the solar electricity can be produced by building integrated PV (potential in Germany of approx. 200 GWp) as well as solar roofs over parking spaces, rails and streets.

One possibility to further reduce the land demand of photovoltaics is to use the same land for electricity and crop production. In first pilot projects of this so called agrophotovoltaics the solar module rows are installed high above the field. Enough light reaches the crops below passing through the glas-glas solar modules (between the individual solar cells) and between the module rows. The yield per area of electricity and food is larger than for separate crop land and PV park.

Another possible variant is the alley-cropping agrophotovoltaics. This is similar to the alley cropping used for agroforestry where crops are planted between rows of trees grown for fruit, nut or wood production. 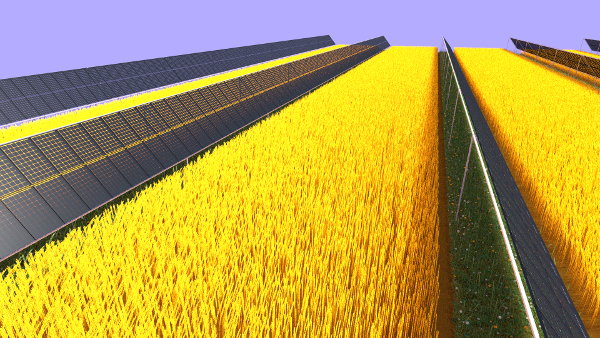 Instead of tree solar module can be installed. The area between the solar modules can be used regularily for crop cultivation. Under the solar modules flowering fields can be planted. As this land is not actively cultivated it provides valuable habitat for numerous plants and animals. This can be an important contribution for the conversation of pollinators and beneficial animals improve the sustainability of agriculture.

Shading of the field with south (left) and south-east (right) orientation of the agrophotovoltaics during the day.

An orientation of the solar modules due south leads to the highest electricity production. This, however, also results in the area directly behind a module row always being in the shade while the aread directly in front of it will always be in the sun. The crops will, therefore, grow at different speeds which makes the optimal harvest of the complete crop land difficult or even impossible.

If the solar modules are instead oriented towards the south east or south west the shadows will move accros the complete field during the day. The resulting average illumination and therefore the plant growth is more homogenous. 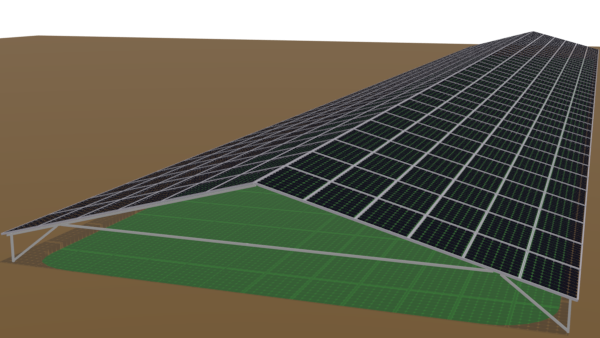 Duckweed is cultivated in a pond below glass-glass solar panels.

Duckweed has been found to be a healthy, high protein food with 10 times higher yield per ha compared to soy. It does not need pesticides, can be harvested daily, does not depend on soil fertility, does not pollute groundwater and rivers with fertilizers, uses only a fraction of the energy and water compared to other crops and has a lower carbon footprint compared to other plant and especially animal based foods.

It is part of the cuisine in (nothern) Vietnam and several companies world wide are working on the large scale cultivation of duckweed for human nutrition among other uses.

As duckweed grows best in partially shaded areas cultivating them using the agrophotovoltaics approach seems promising. Semi-transparent glass-glass solar panels can be mounted above the duckweed ponds - either when using a greenhouse or in an outdoor setup as shown in the picture above. This would allow maximal production of food and energy with a minimal amount of land use.