Agriculture is indispensable as a supplier of food. In its current form it can however have large external costs and can cause health and environmental damages.

In the following the problems of the current conventional agriculture and possible solutions shall be discussed. Finally some measures are suggested for an efficient transition to a more sustainable agriculture.

Factory farming neglects animal welfare. Cruelty to animals is not only unethical it is is forbidden by law in Germany and many other countries[1]. This ban is however weakened by derogations and not implemented. In the German law there is a reference to a “reasonable ground” allowing the infliction of pain, suffering and damage to animals. That factory farming should not be counted to such a category should be obvious. The unnecessary suffering of animals crowded in smallest of possible space is condoned to produce meat as cheap as possible[2].

The high meat consumption resulting from low meat prices is not only not necessary[3] it can have severe negative effects on health. Numerous studies have shown the health benefits of a diet low in meat consumption or a completely vegan diet[4].

In factory farming hundreds and thousands of animals have to live their whole live in a extremely confined space with no access to open air or grazing areas and with only minimal movement possible. The immune system of the animals is weakened and illnesses can spread easily. In practice this leads to an intensive use of antibiotics which similar to the intensive use of antibiotics in human medicine leads to the development of dangerous resistant germs[5]. In cases of severe illness it then happens more frequently, that the needed antibiotics do not function anymore.

The use of pesticides in agriculture pose health risks, too. They can lead to cancer[6], leukemia[7], birth defects and miscarriages[8] as well as to neuromuscular diseases[9]. More than 25 million farm workers suffer from pesticide poisoning worldwide every year[10]. 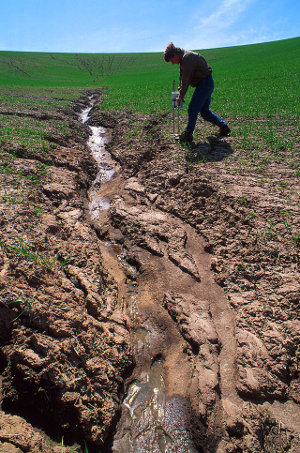 Ecological damages caused by agriculture are expansive[11] and include:

Agricultural land uses 33% of the global land surface[12]. A large portion is linked to meat production (grazing areas, land used to grow animal feed). The land use of a meat based diet is many times higher than for a vegan (vegetarian) diet[13].

Over 95% of the pesticides used do not reach their target species but contaminate air, water and soil[14]. They reduce the biodiversity and nitrogen fixation[15], destroy habitat[16] and endanger pollinators[17] and threatened species[18].

The natural development of pesticide resistances continuously reduces the effectiveness of pesticides[19].

The heavy use of mineral fertilizers and liquid manure produced in factory farming leads to a high nutrient contamination (eutrophication) of surface waters and ecosystems leading to severe ecological damages[20].

Indirect genetic manipulation is practiced by humans since the beginning of livestock breeding. Evolution is hereby imitated. But instead of nature, humans are responsible for the selection of the naturally occurring gen mutations.

In genetic engineering these gene mutations are created artificially. This makes it possible to adapt animals and plants much faster for human use.

Unwanted mutations can however occur and spreading of genetically modified organisms outside the growing area can generally not be avoided. Ecological problems similar to that of biological invasions have to be faced. The invasive species hereby often replace local species[21].

The two main usages of green genetic engineering are the production of plants resistant to pesticides and pests[22]. In the first case pesticides are still being used. Because of the pesticide resistance of the plants grown, pesticide use can even be increased with all the negative effects already mentioned. In the second case pest resistance of the grown plant is generally increased by a higher production of Bt toxins by the plant itself. Pests can however develop Bt toxin resistance and additionally many other organisms beside the target species can be damaged by the Bt toxins[23].

The dependency of farmers on big corporations already given when buying mineral fertilizers and pesticides is increased. The multinational corporations gain patents on the genetically modified organisms and generally forbid the own production of seeds by the farmers. This leads to a reduced variety of crops and farmers being dependent on patented seeds[24].

Fig. 3: Cattle and chicken breeding at an organic farm

Organic farming dispenses with the use of pesticides, mineral fertilizers and genetically modified organisms. It tries to realize a nutritional closed loop system and minimize negative environmental impact to enable a sustainable agriculture[25]. Monoculture is not applied. Instead a crop rotation according to the nutritional cycle is used. Animal welfare is guaranteed which beside others includes a significantly increased available space for the animals compared to conventional farming. 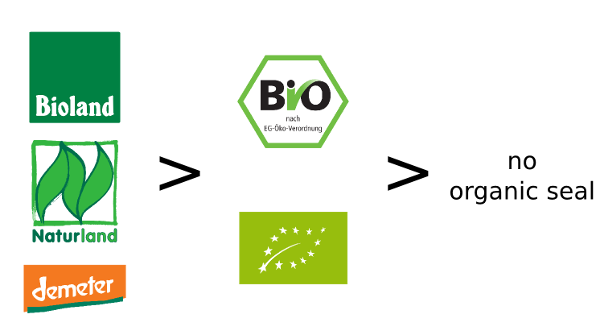 Quite often it might happen that a consumer doubts that a product with an organic seal really was organically produced. There is a fear that conventional produced food is mislabeled as organic on a large scale. While fraud definitely occurs, other branches of the agriculture and the industry are not free of them. One only has to remember the various food scandals including the rotten meat scandals[26]. There are controls to confirm that a product complies with the government norms and labels. These controls are not able to prevent all fraud cases. But generally a consumer can be quite sure that the bread bought at the bakery was made from wheat flour and not saw dust and that food labeled as organic was in fact produced organically.

Organic farming has a 5-34% lower yield per area compared to conventional farming[28]. Because of the resulting increase in demand for land it is sometimes questioned if feeding the world population with 100 % organic foods is possible.

30% of foods worldwide and even 50% in Germany are thrown away[29]. Additionally a meat based diet needs many times more land than a plant based diet (s. below).

100% organic farming is therefore possible even with a reduced demand for land when meat consumption and food waste is reduced. 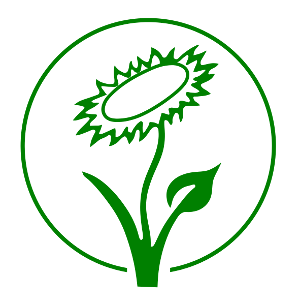 A well-planned vegan diet is adequate for all stages of the life-cycle and results in several health benefits[30]. Can meat consumption with the resulting cruelty to animals and unnecessary slaughter be justified by convenience, habit or taste[31]? Taste can even be imitated quite well in many cases. Additionally the good taste of meat does mainly come from the spices used. Or who likes “his” meat raw, cooked or fried but without any spice or sauce?

Animals from organic farms might have a better live. Therefore organic meat is preferable to non-organic meat. But they, too, are – painfully confined – transported for hours to the same slaughter houses where their violent death awaits them.

An at least vastly reduced meat consumption is also much more environmental friendly. The land demand and resulting environmental damages are much higher for a meat based diet compared to a plant based one (s. Fig. 5). The relativly high energy density of meat does not change that fact (2-3 times that of potetoes, comparable to that of bread[32]). 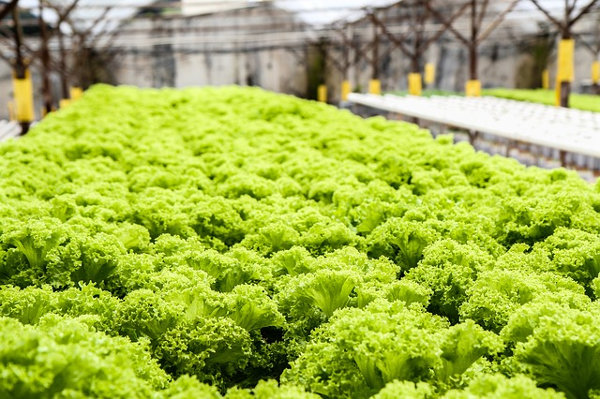 Hydroponics is a method of growing plants in an inert medium (perlite, gravel, etc.) instead of soil. All necessary nutritions are delivered to the plant by a water based nutrition solution. The solution can be applied through different methods (Deep Water Culture, Ebb and Flow, Fogponics, etc.) and can be based on mineral or organic fertilizers[34]. Organic Fertilizers can derived from fish excrements or even human urine. The combination of hydroponics with aquaculture (farming of fish) is called aquaponics[35]. These systems still pose the ethical question of animal farming and slaughter. Ecologically these systems are however preferable to conventional methods of aquaponics and fishery. The latter has the huge problem of overfishing[36]. This is especially true for systems aiming for a closed loop system with fish feed produced from worms or algae instead of fish meal.

Hydroponics is independent of local soil fertility and can be used in greenhouses with controllable lighting, CO2 air content, temperature and nutrient solution. Without soil and in a controlled environment weeds and pests are much less of a problem. This can make the use of pesticides unnecessary. A closed loop water system results in a greatly reduced water use and no pollution of the ground water otherwise often caused by over-fertilization.

The yields per area can be many times higher compared to conventional agriculture. The plants can even be grown in layers stacked one over the other in special kind of shelfs.

For systems with artificial lighting higher yields per area have to be weight in ecologically and economically with an increased energy demand. 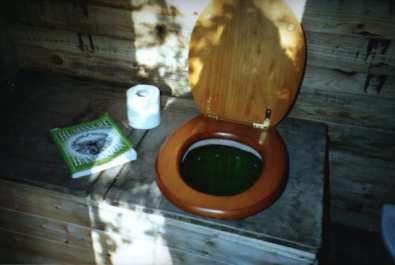 Human waste can provide valuable organic fertilizer for the agriculture instead of causing huge costs in wastewater treatment. Urine contains most of the nutrients, is sterile for healthy humans and is very suitable as plant fertilizer[37]. Human feces often contain pathogens and therefore should not be used as fertilizers untreated. Composting will however kill the pathogens through high temperature and time (1-2 years) and yield a good fertilizer[38]. Compost toilets work without water resulting in large water savings[39].

Using human waste as fertilizer can help close the nutrient cycle and reduce damages to the environment.

Now some political measures are mentioned which can help make agriculture more sustainable and ethical.

Firstly all subsidies in agriculture should be abolished. They were introduced in a time where food supply was still critical. Today there is a large food surplus production in Europe and the USA. This over production on the one hand leads to an economic inefficient and ecological harmful use of food as biofuel[40] or for electricity production. On the other hand it leads to an artificial low market price which fosters wasting of food and can – when exported – damage the agriculture of the importing countries.

The ethical justification for the current system of animal husbandry and slaughter should at least be discussed and questioned in public and politics.

The ban on cruelty to animals should also be applied to animal farming. Animal death transports (to the slaughter houses) should be forbidden. They result in unnecessary pain and suffering of the animals just before their death. An alternative can be lorries refitted as “mobile slaughter houses”[41]. With these the animals can be slaughter directly on the farms or grazing lands. The increased price of meat would better correspond to the reals costs and lead to a largely reduced meat consumption.

A resource tax[42] leads to a price increase of mineral fertilizers. This in turn results in a more efficient use of fertilizers and an increased use of renewable organic fertilizers.

Especially harmful pesticides should be banned (as is already done successively today) and remaining pesticides will be applicable to a waste tax[43] which will reduce its use to its bare minimum.

A fee on land[44] can promote an efficient land use in agriculture.